The Five Healthiest Foods in Norway (original post here) – at number three was oatmeal.
The nutritionists that participated in the study encouraged the importance of whole grains. Oatmeal is a good source of fiber, vitamin B, iron and other important minerals. (I also like the way it leaves you feeling full for quite a while.)We eat quite a bit of oatmeal. I probably cook it an average of three times every week for breakfast. I use it when making multigrain bread. And it is a major component of the granola I make as well. The boys love it, especially with a bit of jam mixed in.

It seems the majority of people eat oatmeal with something sweet added, whether it be fruit, jam, or cinnamon and sugar. I am a bit odd in that I prefer mine with butter, a splash of milk, and a little salt. I blame it on my mom; that’s how she gave it to me when I was growing up. So sweet oatmeal is really weird to me! 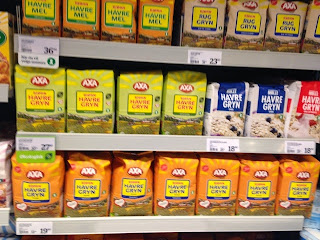