After our stay at Stone Mountain, the boys and I headed for the lake. We arrived just after lunch time on Friday. Mom was on our her way back from vacation with my grandparents, and her husband was still at work. But after unpacking, we headed on over to their house (just 2 doors down) and went swimming.
Once Mom & Tommy arrived home, they took us out to dinner. Saturday, we slept in (well, 8:00 is late for our boys). Then we spent the day swimming, eating, boating, and watching a movie.  It’s been a great visit!
I’m so thankful for the time I’ve gotten to spend with my parents over the last several days. I’m thankful for the way each has shown love, support, and generosity to us. And I’m thankful our boys have had another chance to make some great memories with grandparents. 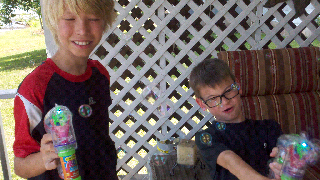 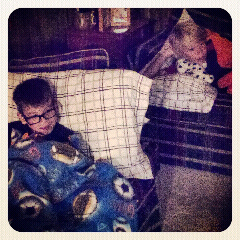 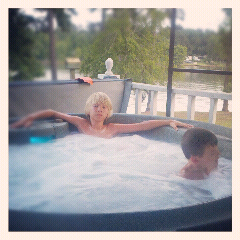 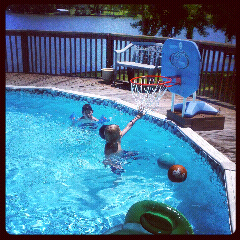 For years, Zack’s dad has been wanting to go on a fishing trip with his boys. So they are finally doing it.
While he spends time with his dad, the boys and I are spending some time with each of my parents. Yesterday, we arrived at Stone Mountain Park to spend about 24 hours with my dad and his wife. We’ve had a great time. Ropes course, 4D movie, mini golf, train ride, sky lift, 4-story indoor playground, outdoor water playground, and the laser show. It was a long and busy day, but it was a lot of fun. 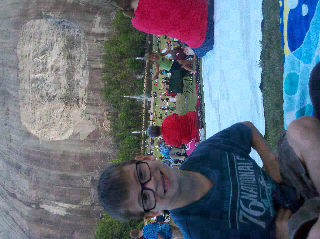 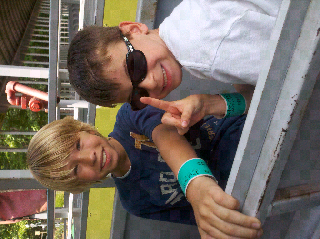 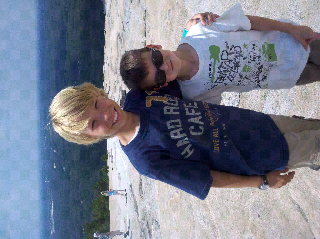 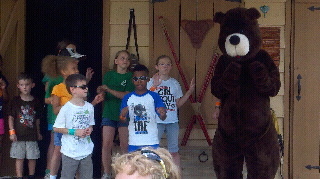 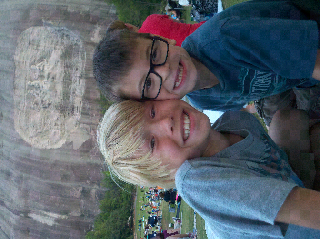 Today marks the last day of work for Zack. He’s been with the same company for nearly 15 years.Longevity in the workplace is something you don’t see much these days. Seems there’s always a bigger company with a better offer. Sure, he had his share of offers and big promises from other companies. And sure, the company where he is has its flaws – every company does. But his company has been great. Good pay, good benefits, good co-workers, good advancement opportunities, and a value for family and personal life.

He could have gone elsewhere and would probably have made more money. But there really is something to be said for a job that gave him flexibility to attend a school play or take a sick child to the doctor, and one that ended well before dinner time each day so we could all sit down as a family. He rarely had to travel out of town, and we knew he’d be home on weekends.

I’m thankful for the way he provides for our family. We’ve always had everything we need, and more. I’m grateful for his strong work ethic (he had a great model in his dad). What a great example for our boys!

And I’m excited about the beginning of the next chapter of our lives!

For those that are new to our blog, Daniel is our younger son and is affectionately referred to as the

Gremlin.
If you’ve ever met him, you get it it.
(If not, you’re missing out!)
Today, I thought it would be fun to interview Daniel and let you know how his summer is going and what he has coming up. So here we go…

Jenn: Hi, Daniel.
Daniel: Hi.
J: How are you?
D: Good.
J: How old are you?
D: Seven.
J: What grade did you just finish?
D: Kindergarten.
J: So that means you are…
D: In first grade!
J: What are your favorite things to do?
D: Make a tent, and eat hot dogs, and peanut butter jelly.
J: Is there anything else you like to do?
D: Play. Have fun with my brother. My brother’s named William. And I have a family. I have fun with my family outside.
J: So, tell me about your summer so far.
D: My dad went to ski. I have fun with my Mommy. I watch TV and my hair is spiky. But not right now. I want to have snow so I could go skiing and make a snowman, but it’s hot outside. I don’t know what temperature it is in Norway. I think that’s all.
J: Are there any places you like to go in the summer?
D: Yeah. On my brother’s birthday, we went to Graceland.
J: What is Graceland?
D: It has food. And Elvis used to live there. And it’s very fun to go there. And one time I went to Tennessee.
J: What did you do there?
D: Just run. I run and the sun was hot there. My grandparents took me to the zoo. I loved it. Now we are just talking about it.
J: What else will you do this summer?
D: Go running. And walking. And go to Stone Mountains and have a away party [going away party], and go on a big ship, the cruise ship.
J: Are you going anywhere else this summer?
D: First we’re moving to Virginia.
J: What will you do there?
D: Just run and some walking and kid’s classes.
J: What will you learn?
D: I don’t know. About Jesus. About how to be a MK, a mission kid. About how to be a good friend.
J: Are you excited?
D: Yes.
J: Are you scared?
D: Yes.
J: What will you miss?
D: Adie [our dog]. And Zoe and Dande [in-law’s dogs], and I miss my old house.
J: What are you excited about?
D: To be a MK. And to make new friends. And to tell them about Jesus.
J: Anything else you want to say?
D: No. That’s all. The end.