The Five Healthiest Foods in Norway (original post here) – at number two was mackerel in tomato sauce. (And hooray – Zack is writing today!…) 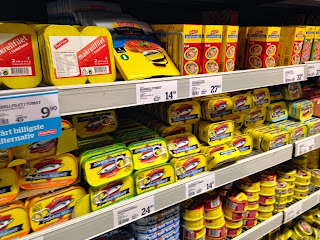 Would you eat a food if the nickname for it was “plane crash”?  Yeah, me neither.  I grew up seeing my dad eat sardines from time to time when we were fishing or hunting, but I think mostly his reason for doing it was to try and gross me out.  Probably the same reason why he would eat raw chicken liver when we were fishing for catfish.

Anyway.  Plane Crash or mackerel in tomato sauce.  Sounds delightful.  And with a shelf life of just over a decade, why not??

I was not much of a fish eater when we lived in the US.  I ate some fresh water fish that dad caught and then salmon and tuna from time to time.  I had to make some adjustments to my diet when we moved here because people (most people) eat a lot of fish.  Beef and chicken are crazy expensive, and  we found cod and salmon to be quite reasonable.

The day after our first Norwegian constitution day here, we went on a weekend cabin trip with some friends.  We stopped on the way and bought some food to share over the long weekend.  My friend K bought some mackerel in tomato sauce and brought it along.

Let me set the stage.  It was hot by Norwegian standards, probably low 80’s and we had been hiking most of the day.  We are in an awesome cabin that was very rustic in many ways.  It did have a toilet, but the toilet (poop, bæsj, crap- whatever you want to call it) basically went through the floor and into the woods outside.  To help cover the odor, you put bark and soil over the top of it to “flush”.  It worked great and we had no problems at all, IF the rules were followed. 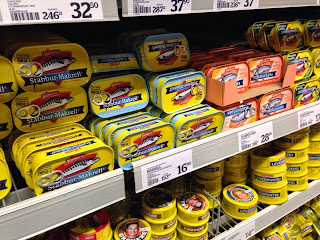 The first – and possibly most important – rule was to keep the door closed.  Well, D and W apparently did not really remember that rule too well and we had just sat down to lunch.  My friend K opened the can of “plane crash” and smeared some on a piece of whole wheat bread.  He offered some to the boys and to Jenn and me as well.  The boys loved it and asked for more.  Jenn declined politely refused, and I took a piece.

Just before I put the piece of bread with the fishy tomato sauce smeared on top, a gentle breeze blew outside, coming up through the toilet and through the door that one of my little guys had left open. It went right up my nose and felt like it punched me in the face.

I went ahead and put the bread in my mouth and took a bite.  My first thought was, I’m gonna hurl!  I silently asked Jesus to help me swallow this food and he did.  I am not very good at hiding what I am feeling or thinking, so they knew I didn’t like it.  After some good natured teasing and ripping, it died down and I was able to finish eating.  K did however send D to shut the bathroom door, for which we were all thankful.

Fast forward about 1.5 years later with some small intervals of teasing from my friends about mackerel in tomato sauce and I am now eating it.  I eat it once or twice a week.  How did this happen?  I will explain.

I was at a leadership conference in Kristiansand (south of Norway) last year and I saw a guy whom I consider to be in really good health and in good shape eating “plane crash” for breakfast.  Mental note number one.

I heard a commercial on the radio where the mom was talking about healthy food and she was talking about mackerel in tomato sauce, but she had to speak English because she didn’t want the daughter to understand and know that she was eating something so delicious and was so good for her.  She then switches to German when the older son comes in (because he’s school age so he would of course already be learning English!). Mental note number two.

My family has a history of heart problems and strokes.  I know taking care of myself is very important.  Fatty fish is good for your heart, memory, skin and also helps with seasonal affective disorder.  I decided to give it another try.  I bought a can of mackerel in tomato sauce and brought it home.  I opened it up and put it on a slice of bread and it wasn’t bad at all.  I continued to eat it, but just out of the can with no bread and I REALLY liked it.

So now, at least 2-3 times a week I eat a can of makrell i tomat (Norwegian).  I like it a lot and it is great to take with you on a hike, in the car, to a meeting, when your wife has surgery and you are at the hospital all day and just for a snack before going skiing or something when you need some quick energy.

(Here are a few TV commercials about mackerel in tomato sauce, based on a song ‘tre små fisk‘)