I’ve posted about what it’s like to drive here in Norway (see post here). What I didn’t address was a driver’s license.The idea of having to take a driving test scared me. Sure, I’ve been driving since I was 15, but being tested on rules in a European country? Whoa. And in another language? Even more frightening! And trying to learn road rules and take a theory test in a second language? No thanks.

There are different requirements based on the license you already hold. Lucky for us, the requirements for someone with a US driver’s license weren’t so bad. As long as we began the licnse exchange process within the first year of arriving, we could exchange our license by completing a one-hour lesson and passing the road test. No theory/written test required. But only if we passed the first time (had we not passed, the requirements were significant.)

Zack began his process last fall, and it went smoothly. After his ‘lesson’ and test, he was the proud owner of a Norwegian drivers license. He was also happy to report that both the school instructor and the driving test examiner did everything in English.

The one-hour lesson does two things 1) it allows you use of the driving school’s car to take the test (we were not allowed to use our own car). And 2) it involves driving with the instructor from Sandefjord to Larvik (where the testing facility is). You get instruction along the way, tips on things to improve, and reminders about rules that are a bit different from what we know from America.

So in late January (about four days shy of one year here – yes, I’m a procrastinator) I began all the paperwork to exchange my license. A few weeks ago, just after Zack returned from the states, I took my test. Same instructor and same examiner. And same result: success!

While we probably could have managed fine taking the test in Norwegian, it was nice to have one less stress factor involved.It feels good to have one more thing in place to make life a little easier here in our new home! 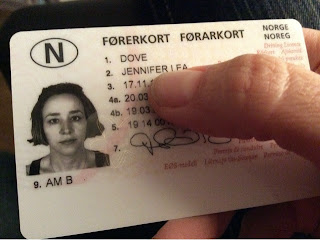 One thought on “Ticket to Drive”