If this blog series were a countdown to the best of the best coffee shops, I would likely have to save this for #1. Or at the very least, in the top five.

But as I am attempting to skip around and mix things up a bit, and because I’m not one to keep a secret, I must tell you about some of the best coffee I’ve ever tasted. I’ve mentioned Grünerløkka before. Artsy, trendy, urban, hip… okay it is actually way too cool a place for me to be. But call us rebels, because despite lacking our cool-kid cards, we tend to hang out there most anytime we are in Oslo. In the midst of pricey secondhand stores (did you know that the word vintage instead of used means you can charge more money), trendy restaurants, sidewalk cafes, parks and über-cool boutiques sits Tim Wendelboe. Tim is, at least in our humble opinion, one of the Coffee Kings. The coffee is carefully selected. Tim travels often to find the best beans from select farms. It is roasted in-house. And when I say in-house, I mean in a quite small shop sitting on a corner in our favorite neighborhood. Don’t go in expecting to find ample seating, as there are only a few seats. Don’t look for an old school coffee machine, because you won’t find one. And I personally would not recommend Tim’s for those who like a little coffee with their milk and sugar. But if you are a coffee purist, I highly recommend a visit. We made some friends in Oslo on our last visit…I was initially reluctant to ask for a picture. But then I thought to myself: if they dress like that, and walk down the most touristy part of the city, then surely they shouldn’t be shocked at such a request.

And they were great sports, even posing with props from the souvenir stand!

The chime sounded on my phone a couple of days ago. As I checked it, I discovered a text from one of Daniel’s teachers. No message, just a photo.

How happy it made me to see him working so diligently during Norwegian class! 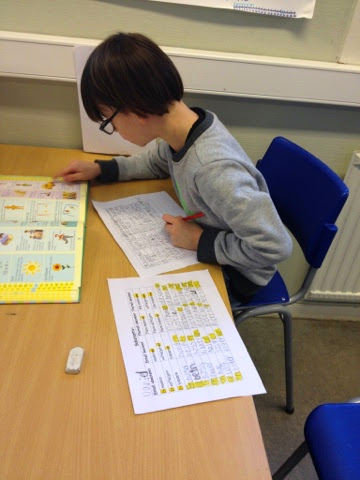 For those who have recently asked, our boys attend an International Baccalaureate School. The majority of the teaching is in English, but they have about 5 hours of Norwegian class each week.

Syttende mai is a fun day, and especially when the weather is as great as it was this past Saturday! We enjoyed a nice walk to the boys schools to start the day. Their classes then proceeded into the city to join all the other area schools for a program and parade.

After some music and speeches, the ‘barnetog’ began. The barnetog is the children’s parade. Much of syttende mai is focused on children, remembering that they are the future. Zack and I enjoyed watching the parade with three families from our neighborhood. Lots of language practice!

After the parade, we had lunch in the city. A big theme of the day is food, especially pølser (hot dogs) and is (ice cream).

We took a short break at home, so everyone could rest a little. Next up, we were back to the city for the ‘borgertog’. Borgertoget is the citizens parade. It includes teams, clubs, corps (marching bands) singing groups, etc. William participated with his football team. Zack, Daniel and I met up with several friends to watch the borgertog.

After the second parade, and an obligatory ice cream, we drove to Larvik/Faris Bad for a cookout and evening with friends: really good food, lots more Norwegian practice, and plenty of time to relax, Plus, the boys got to drive a boat and relax (yeah, right!) in the hot tub!

It was a really fun day, and we all slept great afterwards! Thanks to so many wonderful friends for including us and making us feel at home on your country’s special day. *A quick bit of history, if you’re interested in it: Norway boasts the second oldest constitution in the world that is still in use. The constitution was signed on May 17, 1814 in Eidsvoll, just north of Oslo. It was the first major step the nation took towards becoming a democracy. (Norway and Sweden ultimately dissolved their union on June 7, 1905, as the first Norwegian king took the throne on November 18th of that year.) The tradition of russ is observed by most students during the last month of their final year of vidergående skole / high school. We recently interviewed two students about the tradition, and about how their observance of russ tradition differs from most.

Related to us
Daniel had his first Norwegian checkup today. Everything went well. We really like our family doctor/GP. He is patient with our bad language skills, and seems to be quite thorough. A couple of things that were interesting to us and quite different from our experience in the states:

Have you ever visited a doctor in another country? Did you notice differences from your home country?

Now that we are getting back into the language school routine, I thought I could share a little about it.Our current class meets 4 times a week. We meet from 12:10 – 2:35, and have Wednesdays free.

Not sure if it’s the norm, but all of our classes so far have been around 20 – 25 students.

We do a variety of things. There is always a text book, and normally a workbook to go with it. So some of our time is spent going through the text book, reading together aloud, reading in groups, sharing discussion questions. We have times where we talk about current events or cultural happenings. We have lessons in grammar (which I love, but I’m a grammar geek!). From time to time, we’ll have a special event, like a day at the beach, or a time to bring food and share things from your home culture. We have homework, writing assignments, and opportunities to do oral presentations.

In our beginner course, the teacher would use some English to help explain things. But since moving to the next level last August, it is taught only in Norwegian.

Our classes have really been helpful in our language development. And it has been a good way to meet some many great people!

It’s always good to know how to introduce yourself. This is one of several key phrases we focused on before arriving in Norway.

ADVICE: don’t merely depend on your reading skills when learning a new language. You really need to hear it from a native speaker. Say it back and let them have the freedom to correct you.

We thought we were doing great. But sometimes we would get strange looks. Apparently, as we later figured out, Zack was saying something that sounded more like “I hate Zack.”

Here in Norway, we have two sets of tires for our cars: summer tires and winter tires. We have almost no storage space here, other than one closet outside of our front door (yes, one closet in our entire house – that’s a lot different from where we lived in the US). So, like many here, we have to take the extra tires to a tire storage facility.

Literally, a tire hotel. It’s also where you can buy tires. But basically, you pay to store them and to have them changed out twice a year.

So we’re there, waiting on the guy who’s doing the paperwork. Another guy walks up to me and asks if he could help me.

Here’s the thing I’ve mentioned before: you typically rehearse dialogue before completing a task. Well, we’d already used all of that dialogue with the other guy, so I’d kind of filed it away.

And in my haste to answer him, instead of saying I’m here about tire storage, I tell him that “I am a tire hotel.”