Once again, our travel – this time, to Athens – was preceded by the mandatory coffee research. As I began reading, I ran across info about a shop called Taf. And when I saw that one of their baristas, Konstantinos Iatridis, had recently come in second place in the 2015 World Brewers Cup, I knew I wanted to check this place out.

So imagine my surprise when I started chatting with the barista behind the counter, and discovered that he was none other than the World Brewers Cup man himself!

We talked about the recent championship, and about the fact that he came in second to a Norwegian barista from Supreme Roastworks, a fantastic shop in Oslo that we have visited on several occasions.

Iatridis has been in the coffee game for about six years, the last half of that time working in the specialty coffee industry, at Taf Coffee. When asked what sparked his desire to become a barista, one name came up: Stefanos Domatiotis.

Domatiotis is a well-known name in the coffee world, winning the World Barista Championship in 2014, and being named Greek Barista Champion six times. So for Iatridis to be inspired and motivated by the likes of a Stefanos suggests a truly deep passion for coffee. After spending the day walking all over the city, it was nice to take a break and savor a quality cup of coffee. We found a table outside, and ordered a V60 and an espresso. The V60 was good. Okay, good would be quite an understatement. But Konstantinos impressed me most with the espresso. He offered us several options, and we chose Taf’s Rosebud blend. It is a mix of Ethiopian, Rwandan, and El Salvadorian beans. As our skilled barista explained, Rosebud’s cup profile has a creamy feeling and smooth body, with notes of cherry, apricot and tangerine. I’ve tried a lot of espressos. I’ve had some that were great, and some that I struggled to finish. But Taf’s Rosebud espresso is one of the best I have ever tasted. It’s a tribute to quality coffee, quality roasting, and a barista who knows what he’s doing! Konstantinos enjoys being a barista, and it shows in his attitude and his coffee. He loves his job and he loves coffee. He is extremely knowledgeable, and his fantastic people skills make a stop by Taf Coffee all the better. When asked what he prefers to drink, Konstantinos opts for the coffee he used in the World Brewer Cup championship, a Ninety Plus maker series from Panama. And Iatridis is a coffee purist, preferring a filter coffee over anything else, due to the fact that this methods makes it “easier to realize all the aromas and the characteristics of the coffee.” Thanks to Konstantinos for his time, expertise, and help in making our afternoon at Taf so very satisfying! Milestone birthdays call for special celebrations. And since Zack celebrated number 40 this past month, we thought it fitting to celebrate big!We started out with a few days with his brother in sister-in-law in London, and then flew to Athens, Greece.

Zack’s parents purchased concert tickets for us to see one of our faves, Zac Brown Band, in London. We spent a long weekend there and had a blast at the concert. But I think we’d all agree that the best part was spending time with Josh and Savannah!

After our London weekend, we flew to Athens, Greece. This was Zack’s main birthday gift: visiting a city that has been at the top of our list for quite some time. We had a great time exploring ancient sites, visiting with friends, and eating incredible food.

Here are a few highlights from both cities. I’ll try to add more details via future posts… 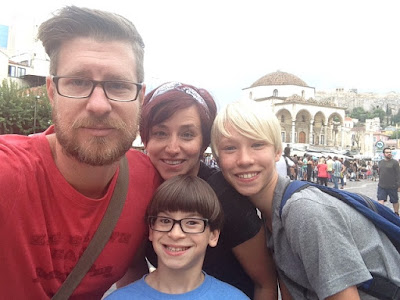 I’m playing catch up after a few busy weeks of work and travel. But I’ll be back with more very soon.In fact, I have several blog posts in the works, so stay tuned…